At Society Awards, we are unlike any other awards brand. Our experience includes designing and creating art objects for the most renowned brands. We have the agency-style expertise and luxury brand reputation necessary to work with major designers, artists, and artisans. 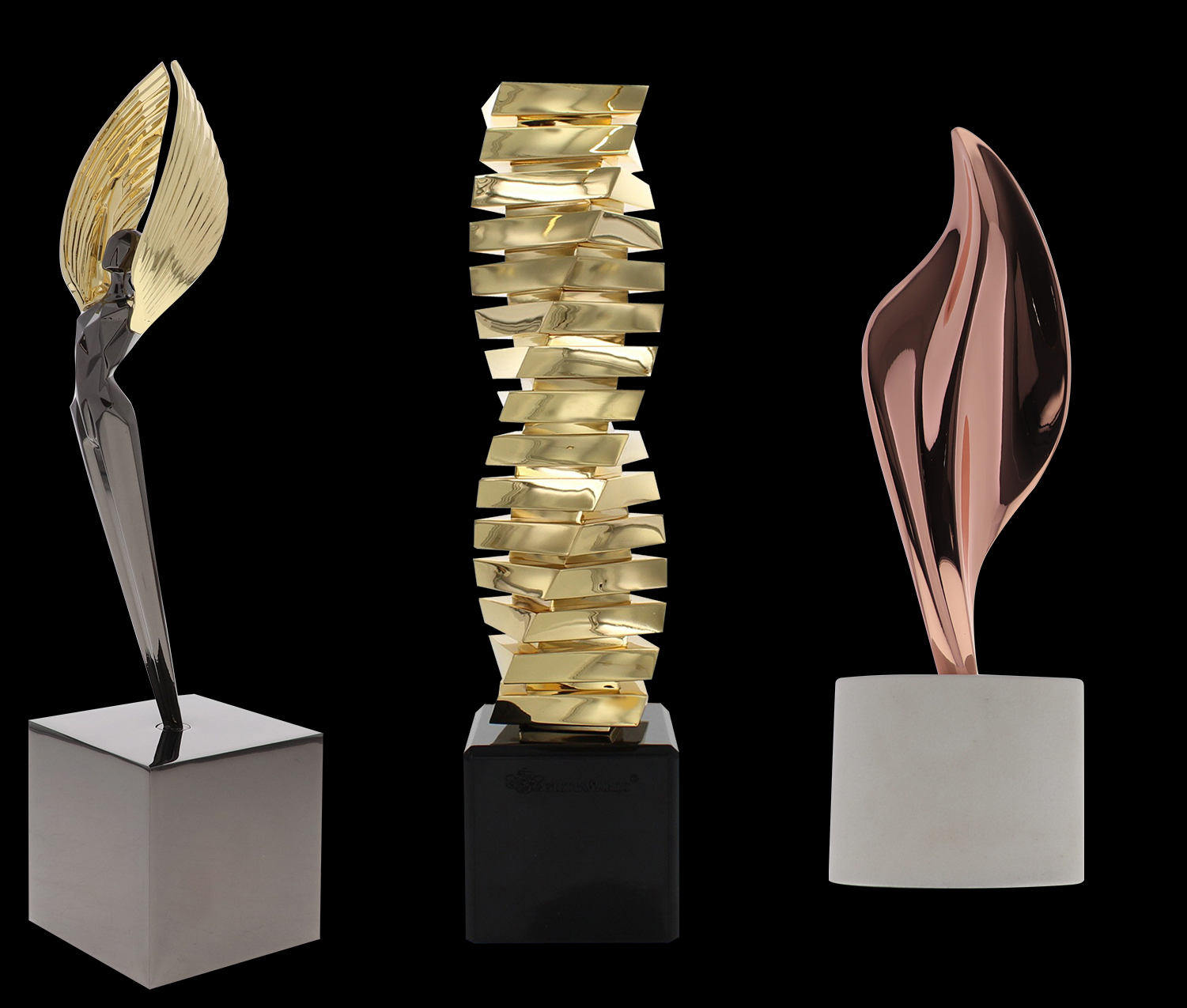 We have collaborated with many of the world’s biggest and most prestigious artists. This has included connecting clients with artists and designers to create exceptional and unprecedented collaborations, many for the first time in history. It is an immense honor to work with these world-renowned artists.

David Yurman personally designed the 50th Anniversary Milestone Award trophy with his classic cable motif using more than 1,010 grams of sterling silver per trophy. The iconic ACM cowboy hat is encrusted with 4.16 carats of black diamonds and an 18k gold band. A black onyx signature Albion® gemstone with the numeral 50 inlaid in 18k gold rests in the center of the hat. 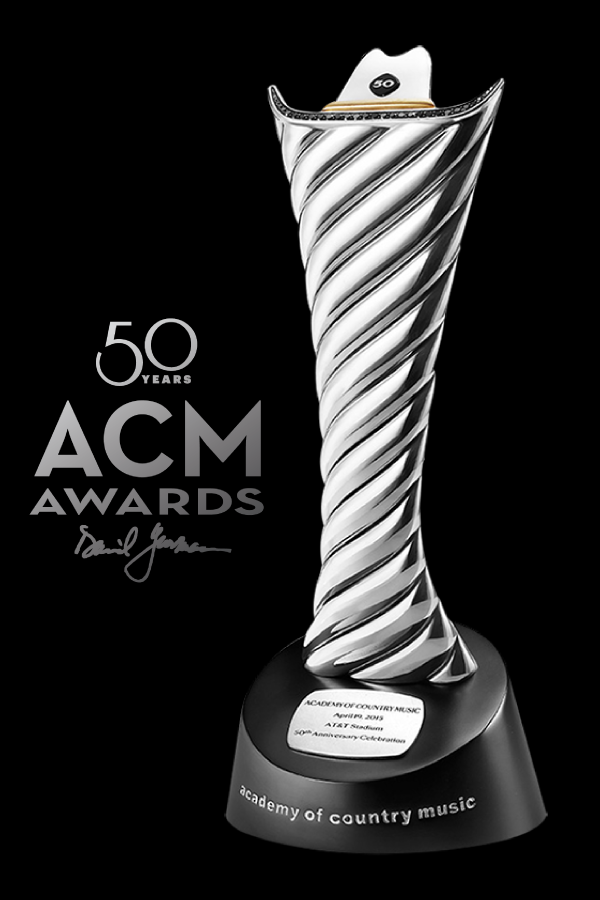 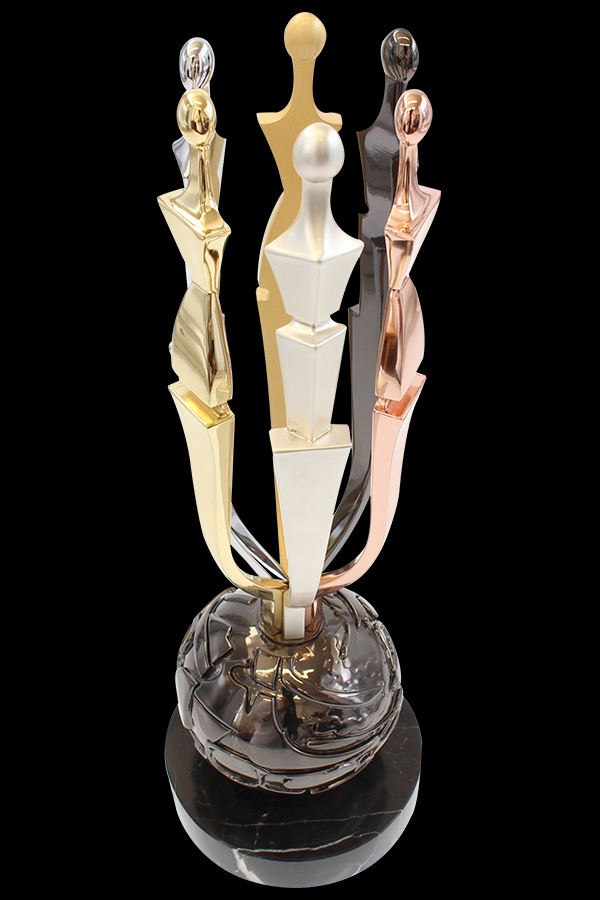 We worked closely with Ruben from ideation through to manufacturing, bringing his sketches to life in 3D renderings and providing realization of the design into pure metal. The final trophy was manufactured using machined aluminum to allow for the complex shape and luxurious finish.

Society Awards has had the privilege of recreating well known masterpieces. Our expert craftspeople use their extensive knowledge to create the perfect reproductions.

To celebrate winners of the American Society of Magazine Editor’s annual Ellie journalism awards, we worked with the Calder Foundation. The award is a faithful licensed reproduction of an original Alexander Calder sculpture. The form is made up of machined aluminum pieces, which receive a brushed finish before being assembled by hand. The final form is a museum-quality objet d’art and an incredibly unique award. 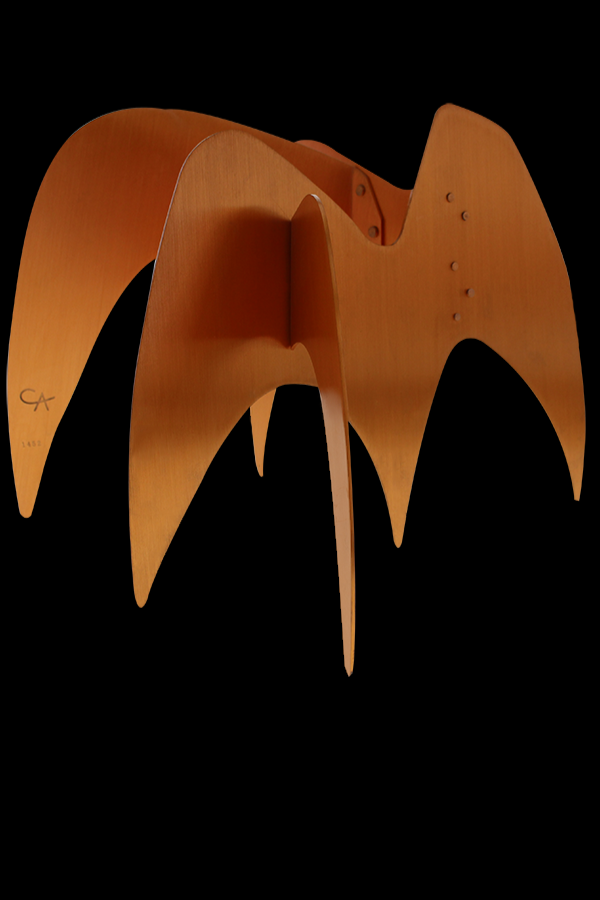 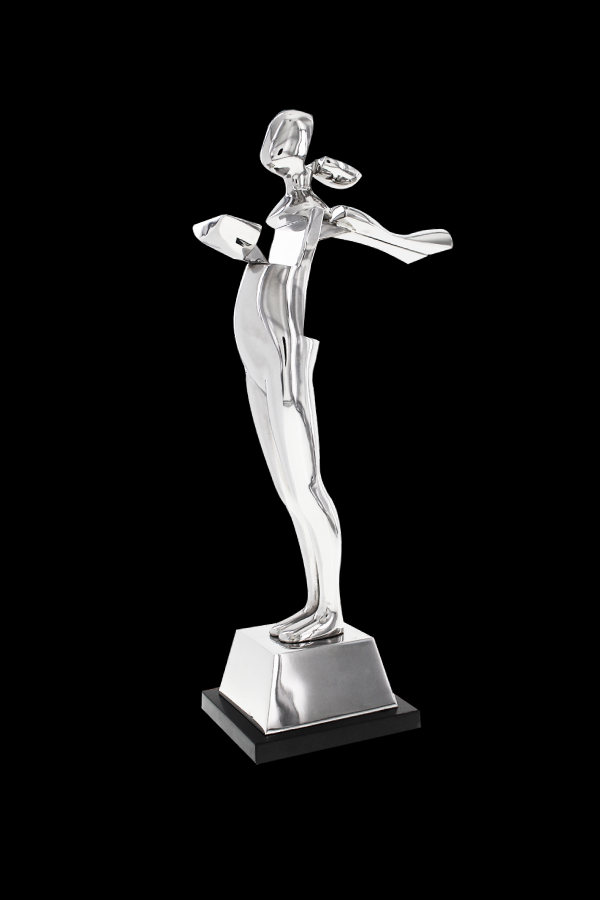 Sculptor Ernest Trova designed the iconic statuette awarded at the Council of Fashion Designers of America's annual event. The mix of sharp edges, deep indents and convex surfaces that define this work of art make for a very complex manufacturing process.

Our advanced production and finishing techniques result in a highly consistent, museum-quality reproduction. Notably, we employed advanced hand polishing to match the luster of finish within the deeper crevices to the rest of the award’s alluring surfaces.

ONLY AT SOCIETY
AWARDS

Society Awards not only creates beautiful recognition trophies for the world's most prestigious programs, we craft a line of custom-quality awards for sale as our Exclusives line.

Each of the Exclusive line trophies meet our industry-leading standards for style and craftsmanship. Our acclaimed, in-house designers follow a process similar to that of fine artists. Exclusives Collection inspirations include architecture, modern art, and industrial design. The world around us provides infinite volumes of meaningful inspiration and the greatest works of art make us feel more connected to our world. Our designers are able to process this raw data into sculpture of all tastes and styles. 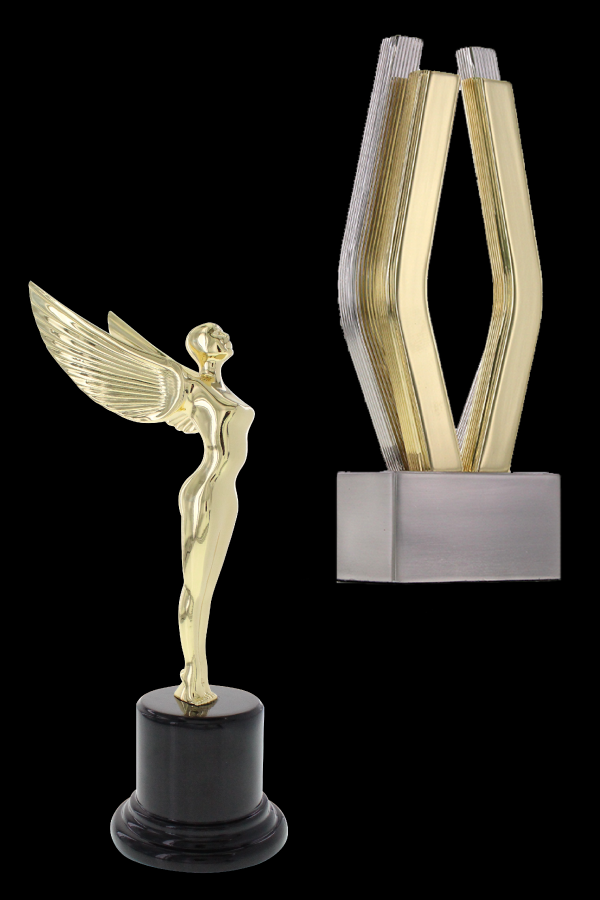 In addition to our Exclusives, we worked with the high-end design brand Nambé to launch the world’s first and only designer brand-name awards. Recognized as a global leader in design for more than 65 years, Nambé develops products that bring function and style into the home.

The collaboration was a meeting of minds for two design-focused brands. Each trophy in this collection is a thoughtful expression of timeless, Nambé style. Nambé + Society Awards trophies are individually numbered and arrive in our custom, silver gift boxes –exclusive to this collection. In addition to the limited edition Nambé + Society Awards trophies, we offer a wide range of Nambé gifts that can be personalized with text, logos and colorfill.

To have our awards on display in different museums is an immense honor. From working with world-renowned artists, graphic designers, fashion designers, brands and personalities, to our own concepts, we know how to fit the product to the occasion.

The YouTube Red Diamond Creator Award is on permanent display at the Baccarat Museum in Paris. This project was a collaborative effort between the creative team at Society Awards and the craftspeople of Baccarat. The crystal is crafted in France from Baccarat’s proprietary red crystal, colored with 24k gold. The crystal is mounted in a hand polished, black nickel aluminum form inspired by the Diamond Creator Award. 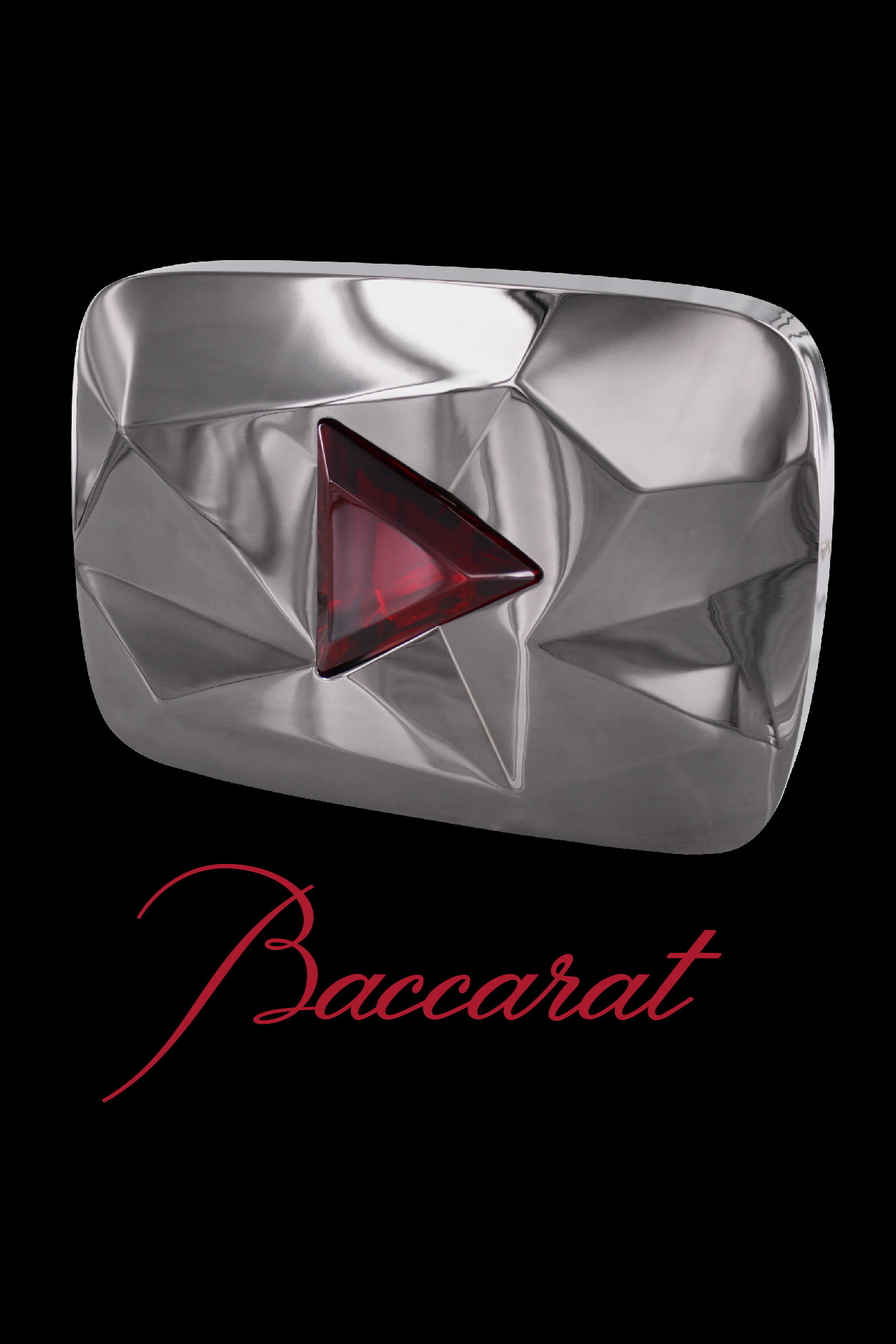 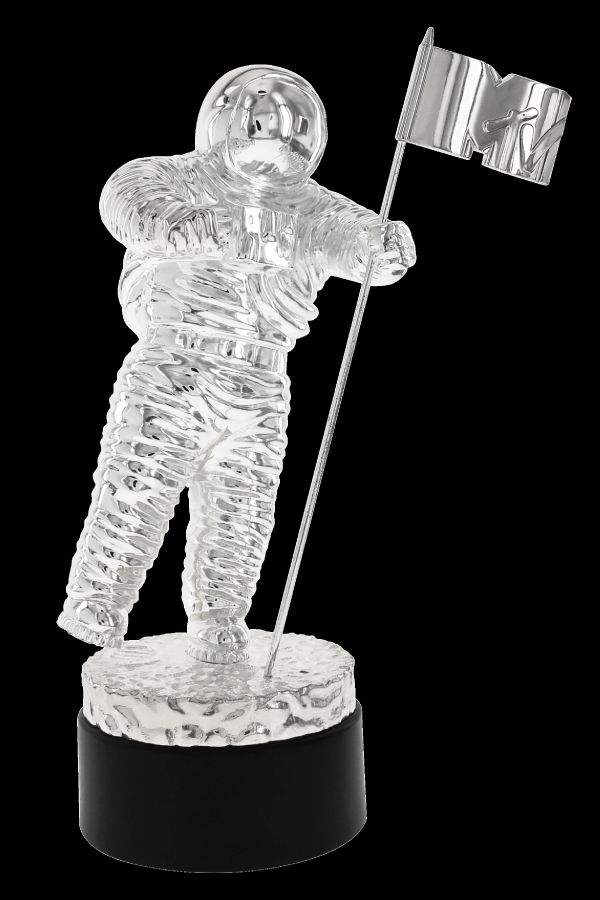 The Museum of the City of New York debuted a new exhibition, New York, New Music: 1980-1986, that revisits the music scene of the early 1980s in New York City. The exhibition will feature the MTV Music Awards Moon Person Award Statue, crafted by Society Awards.

Coinciding with MTV's 40th Anniversary, the yearlong exhibition is organized around a series of key "moments" and features more than 350 objects, including video footage, photography, artifacts, and objets d’art.

When clients have creative needs, it’s an opportunity to show our firm’s incomparable advantages. Our expertise and credentials open doors to work with global icons and world-renowned artists.